What Are Airsoft Weapons? 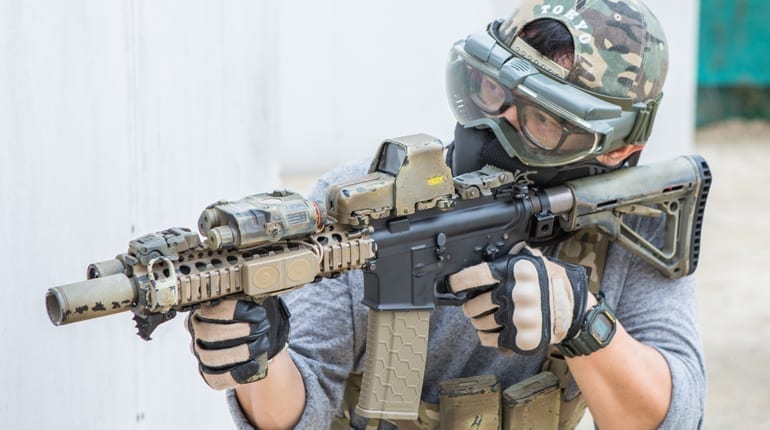 What Are Airsoft Weapons?

Airsoft guns are weapons created for leisure purposes including general target practice and skirmishing. Players choose guns that have either air or spring power and they use pellets as bullets.

Airsoft emerged as a hobby Japan in the 1970s and 1980s when it was incredibly difficult to hold an actual weapon legally but there was a tremendous appetite for weaponry for sport. Manufacturers produced Airsoft guns to meet the need for realistic-looking weapons so players could participate in military or police scenarios without injury.

The weapons and technology have improved significantly in the decades since and guns have become more realistic and powerful. New innovations such as hop-up units and using carbon dioxide are taking Airsoft play closer than ever to using the real thing and UK laws have responded accordingly.

How is Airsoft played?

When played competitively (rather than for target practice), the objective is to “hit” or “tag” other players with the small plastic ball fired from the gun. In this way, it’s similar to paintball, including the large areas both are played over, but unlike paintball, it relies on an honour system as it can be difficult to tell if someone has been hit. Players can choose from three different types of Airsoft weapons depending on how they are powered. Choose from gas, electric and spring powered guns with each having their own distinct advantages.

Two-tone airsoft guns describe a gun which is sprayed over at least 51% of its surface with a bright, non-military colour, to show that is a replica and not the real thing. On a rifle, this is typically the Upper Receiver, Hand-guard and Stock, and on a Pistol the Slide.

If you are 18 years of age or over you can buy a 2 tone Airsoft BB Gun, one which principle colour is significantly different from that of a real firearm, for example, bright orange, green, blue. You can buy a two-tone Airsoft BB Guns and either gift it to someone else, or allow them to use it – regardless of their age – you are not breaking the law. So, a parent can buy a 2 tone airsoft gun and give it to their child to use or keep.

Since 2007 you can only buy a realistic imitation firearm (one that looks like a real gun i.e. black) if you are at least 18 years old and meet one of the following conditions; you are a registered airsofter with membership, authorised by an insured skirmish site. You have a current UKARA membership, you are a member of a properly insured historical re-enactment group or society, you are a film, tv or theatre production company, you are or are acting on behalf of a museum or you are a crown servant in pursuance of your Crown duties.

Airsoft is often played in a realistic playing arena, with a real mission and authentic-looking weapons, it offers a real sense of the battlefield. Airsoft is excellent fun but it also promotes confidence, fitness, teamwork and builds friendships. Enquire today about our current catalogue and how to find the best Airsoft weapon for your needs.