Home / How To / What Are the Differences Between High, Mid and Low-Cap Magazines

What Are the Differences Between High, Mid and Low-Cap Magazines 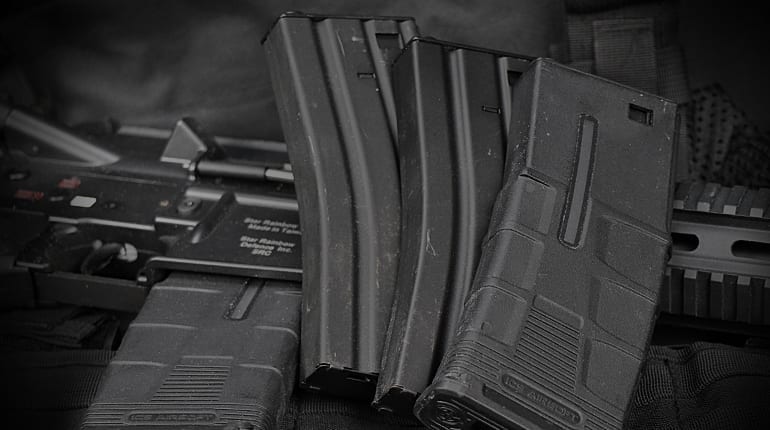 What Are the Differences Between High, Mid and Low-Cap Magazines

One of the greatest things about airsoft is that it can be played how you want it to be played. Unlike many outdoors sports that have very specific rules on what can and cannot be used, airsoft is somewhat of a blank canvas outside of the general rules regarding safety, and with that comes the ability to play it as seriously, or as casually as you want it to be. Once you’ve picked up your first few airsoft guns, the question of how ‘realistic’ you want your ammunition restraints to be comes into play, and generally, the choice is yours. While your more serious events will place ammunition limits to retain a level of realism, your average Sunday skirmish will give you the rule of the roost, with the only ammunition limits being self-imposed. But just how do you go about limiting your ammunition limits within airsoft?

THE HIGHS AND LOWS OF AIRSOFT

Thankfully, imposing ammunition limits within airsoft is fairly straight-forward, mainly due to the three different kinds of magazine available for use within airsoft. Known as high-caps, mid-caps or low-caps (caps standing for capacity), each type of magazine has its own unique set of advantages and disadvantages, each lending themselves well to a different playstyle of airsoft. If you’re just starting out, it can be a daunting decision, but fret not, as we’ll do the hard work for you and break each type of magazine down for you!

The high-cap, or high-capacity magazine, is the proverbial starting point for most airsofters, and the magazine which holds the largest number of BBs at any given time (with the exception of box magazines). A standard high-cap magazine can hold anywhere between 400 to 600 BBs dependent on brand and weapon type, and is generally the type of magazine that you’ll find supplied within the box of your airsoft rifle.

High-cap magazines are simple to load, with a small window found on the top of the magazine to load BBs into, meaning they require no special equipment to load. Once you’ve filled the chamber, you wind a wheel found at the bottom of the magazine to feed the BBs into a tube. Once these BBs have been expended, you’ll have to wind the wheel again to load more BBs into said tube.

The mid-cap provides a brilliant middle point between high-caps and low-caps, and are often found being used by the more experienced players on the skirmish field. Instead of a large chamber, mid-caps utilise a tube in which BBs are loaded into. When the tube is filled with BBs a spring found in the tube is compressed, which then pushes the BBs out when loaded into an airsoft rifle. The average mid-cap stores anywhere between 80 to 150 BBs.

Due to how the BBs are stored under tension, you no longer have an annoying rattling sound which can often give away your position. However, the trade off is you need a specialist loading tool to fill them known as a ‘speed loader’.

The low-cap, otherwise known as low-capacity magazines or ‘real’ caps, are magazines designed to reflect the real-world capabilities of specific weapons. Low-caps utilise the exact same design as mid-caps, however, the feed tube and accompanying spring are shorter, leading to less BBs carried. This leads to a much more calculated style of play, with individuals beginning to choose their shots more carefully, and often choosing to avoid certain engagements due to being outgunned.

Low-caps are essentially the de-facto choice for hardcore Mil-Sim events, with game organisers looking to re-enact real-life combat as best as they can – and realistic ammunition constraints allow for a much more realistic environment, and adds credence to the use of LMGs; which are often just added weight in typical airsoft skirmishes.