Home / How To / What is an Airsoft MOSFET?

What is an Airsoft MOSFET? 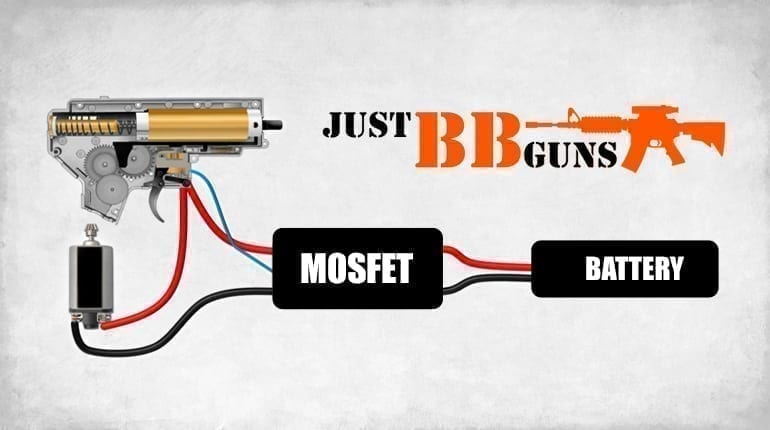 What is an Airsoft MOSFET?

WHAT IS AN AIRSOFT MOSFET AND WHAT DOES IT DO?

With the introduction of some new high-end airsoft rifles at Just BB Guns, one question keeps popping up… What is a MOSFET and what does it do?

In short, a MOSFET (Metal–Oxide–Semiconductor Field-Effect Transistor) is an electrical component, a kind of transistor.

How does this apply to airsoft?

When every airsofter on the field was using the standard NiMH style batteries, Mosfets were few and far between. However, with the rise in popularity of LiPo batteries, they have become more and more essential.

LiPo Batteries typically have a higher discharge rate (and available amps) to deliver to the motor. The higher amperage and discharge rate results in what is known as ‘arcing’. This is a small electrical bridge that spans the opening gaps in the trigger contacts.

The problem is that an airsoft motor will draw more amps than the trigger contacts can withstand. This issue occurs with all battery chemistries with high amp delivery. However LiPo batteries make it more common due to the availability of high amperage batteries that will actually fit within the gun.

The amps cause burning, pitting and general ruining of the trigger contact areas. They eventually fail – resulting in a gun that doesn’t fire or worse, a gun that won’t stop firing.

This is where MOSFETS step in.

Wiring a MOSFET into the AEG means that the trigger switch can apply voltage via the ‘gate’ and then the MOSFET channels all of the electrical current through the ‘source’ and ‘drain’. This means that all of the dangerous amps, that would otherwise damage the trigger contacts, go straight from the battery to the motor.

This rerouting of the electrical current not only protects the trigger contacts but also reduces the overall resistance of the circuit (trigger contacts introduce a lot of resistance), improving rate of fire and trigger response.

Airsoft MOSFETS usually have a bunch of extra components that make them suitable for airsoft (this means they aren’t really supposed to be called a MOSFET, but the name has stuck). These extra components can do 2 things, they protect the MOSFET from overvoltage (and other potential damage), or they can offer extra features, such as battery discharge protection, rate of fire control and active braking.

I should also say that there are various types of MOSFETS available with many different types of functions and features, some items are even falsely named MOSFET.

From Mark…
You do not require a MOSFET in your airsoft gun unless you wish to control your rate of fire with bursts of 3 to 5 shots, or you have a high-end expensive gun that runs high-powered Lipo batteries.