Home / How To / Choosing a Scope for Airsoft

Choosing a Scope for Airsoft 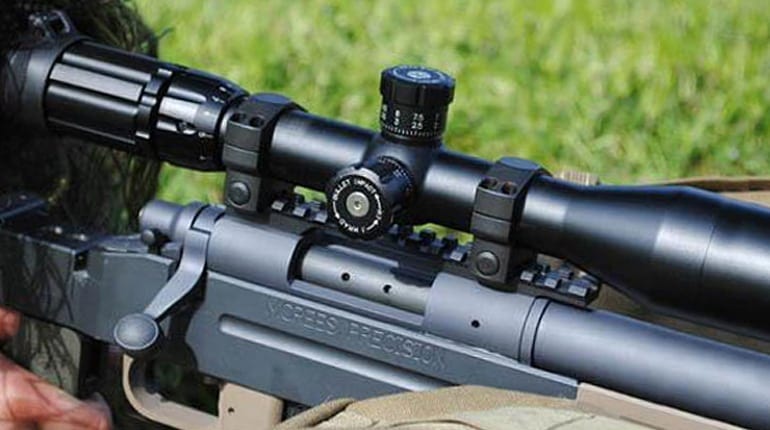 Choosing a Scope for Airsoft

Scope sights are extremely popular among airgun users as they leverage every little bit of accuracy from a gun. They also forgive a lot of common sighting errors, as seeing the sight and target clearly at the same time is a great aid to accurate shooting. This article will explain a lot of the confusing terms used to describe scopes, plus we will look at how things really work. No one scope is perfect for every job, so by understanding the terminology you can better understand which scope will best fit your needs. We will look at the common terms first, then we’ll explore the types of scopes to use for different shooting situations.

WHAT DO THE NUMBERS MEAN ON THE SIDE OF THE SCOPE?

So, for example, (4X32) the number (4) refers to the magnification power of the scope. A 4-power scope enlarges the image four times. An 8-power scope enlarges things eight times, making it seem to be closer than when seen through a 4-power scope. That sounds good, but there are drawbacks to power. The higher the magnification, the less area you can see through the scope. If your scope is too powerful, you may be able to see ants crawling on a blade of grass, but you’ll never know which blade it is because they all look the same. Higher magnification also eats light. An 8-power scope will show the same image darker than a 4-power, if everything else is the same. There are ways to increase the amount of light that passes through the scope, such as larger lens diameters and even a large scope tube diameter, but if that goes too far you get a large scope that is more difficult to mount. Every lens in a scope robs a tiny bit of light that tries to pass through, so the higher the magnification, or the more lens coatings, usually the darker the image.

WHEN TO CHOOSE HIGH AND LOW POWER

Choose (4) for general shooting, (6) is OK for experienced shooters. (9) to (12) power is good for long distance shooting and (20) for targets that aren’t going to move. The number (32) in the (4 X 32) model name refers to the diameter in millimetres of the objective lens. That’s the end opposite the end you look through. The larger the objective lens, the more light that can pass through it and the brighter the image at a given magnification. As power increases, the need for light also increases; otherwise, you’ll be looking at a large dark shadow. That’s why high-powered scopes have large objective lenses. A (4 X 32) is brighter than a (12 X 40) because the (320 mm objective lens does more for the lower-powered scope than the 40 mm lens does for the higher-powered one.

Many scopes have variable power, which is indicated in their title. Instead of a (4 X 32) scope, you might see a (4 – 12 X 32) scope. In that case, the scope’s magnification is variable from four to twelve power and the objective lens is (32) mm. Take a look at some of the scopes on this site and see how easy it is to know their performance characteristics, just from these numbers in the model name. The power adjust ring, on the back of a variable power scope determines what setting is selected. Variable power scopes are very popular because they give you the benefit of several power options. For sighting in your gun, a low power is desirable initially, because you start shooting very close. When you want to reach out with precision, higher magnification is usually wanted. With a good variable scope, you get the best of both worlds.

Crosshairs usually consist of one vertical and one horizontal line. In the distant past, these were actual threads of silk or spider webs, but today they are more often either thin metal wires or even lines etched on glass. They are housed in a tube called the erector tube and the adjustment knobs move this tube in the desired direction. That’s why the reticle lines appear centred on nearly all scopes. A few scopes from Europe have reticles that actually move in your field of view when they are adjusted, but most shooters prefer reticles that are always centred.

A plain reticle is just two lines that intersect in the centre of view. There are many types of reticles but only a few are popular. The plain reticle is just what it sounds like, two intersecting lines with no other features. The only choice you can make with this type is how thick or thin the lines are. Since this reticle is often used for paper targets, thin lines might be best. If you intend to do general shooting with it, however, get a reticle thick enough that you can find it when looking into dark foliage.

A duplex reticle has thick lines that taper to thin lines near the centre of view. It is the most popular reticle because it addresses the most needs. The duplex reticle is probably the most popular type today. In a duplex the reticle lines are thicker on the edges, then taper to thin in the centre of the image. The thick sections are easier to see against a dark background and the thin lines provide a more precise aiming point. In really dark situations, you may not be able to see the thinner lines at all, but the thick outer lines point to the centre where they intersect.

The mil dot reticle is becoming more popular every day. It gives additional aim points, plus it can be used to determine range, if the shooter knows the maths. The mil dot reticle is a military design that is now becoming popular among airsofters. Along the lines of a plain reticle, small dots are placed at precise distances from one another. They enable the shooter to measure angle downrange while looking through the scope. The mil unit of angular measurement is used because a mil is smaller than a degree of angle. There are 6,400 mils in a full circle. The literature that comes with the scope will tell you how many mils are between each dot.

To determine range with a mil dot reticle requires the use of an algebraic formula that most shooters either don’t know or don’t care to do, but the dot reticle is still quite valuable. As the shooter becomes familiar with the reticle over time, he will develop a sense of how to best use the dots. Most shooters use the dots on the horizontal line as alternate aim points for windy situations.

When you focus a scope, you aren’t making the target appear sharper like you might think. Focusing means adjusting the eyepiece to get the reticle lines as sharp as possible. You normally only focus a scope one time and leave it that way unless something happens to change the focus.

The focus ring on the scope tells the shooter which way he is adjusting the eyepiece. To focus a scope, look through the scope at a light-coloured wall. You are looking to see that the reticle is in sharp focus. If it isn’t, adjust the focus ring until it sharpens as much as possible. A hint here is to not stare through the scope for longer than a few seconds, or your brain will refocus your eyes to sharpen the image. Some scopes have a diopter indicator on the focus ring. Once the scope is focused, it shouldn’t need changing unless the shooter’s eyes change, so a prudent shooter remembers where the ring is set (if there are markings). That allows the shooter to refocus the scope by adjusting the ring back to the mark rather than going through the whole focusing process again.

Don’t confuse parallax adjustment with focusing the scope. When parallax is adjusted, it cancels as much parallax as possible between the reticle and the target to give you the best possible chance of hitting the target. Parallax is the term that describes the difference in angles between objects that are seen up close and those seen far away. When you look at telephone poles pass by on the side of the road, those closest to your car seem to pass very fast, while the ones far away seem to go very slow. That difference is due to parallax.
Parallax ring Most scopes with adjustable parallax (also called AO) have the adjustment on the objective bell, like this AirForce scope.

The large optional sidewheel on this Leapers scope makes parallax adjustment easy! The reticle in your scope is like a telephone pole that’s very close. If you move your head on the stock while watching the target through the scope, it’s probably possible to see the reticle move against the target. That affects where you perceive the aim point to be, and that affects your accuracy. Parallax correction reduces this phenomenon to the greatest extent possible.

To use a parallax ring, which many scope manufacturers call an AO (for adjustable objective) ring, turn the ring until the target appears sharp in the scope. The true distance to the target may not always agree with the numbers etched on the parallax ring of the scope, but the scope is adjusted when the image is at its sharpest.

Some newer scopes now have the parallax ring on the turret with the windage and elevation knobs. It works the same way; the only difference is the location.

HOW TO CHOOSE A SCOPE

Choosing a scope is not easy for anyone. There always seems to be another model that has some features you also want, but can’t get on the model you select. That’s because a scope is full of compromises.

If you can afford one, buy a variable-power scope every time. On low power, it will be bright and on high power, it is easier to see a well-lit target.

Airsofters need less power than target shooters. Live targets move and a wide field of view is important if you want to see them through a scope. Low-powered scopes have the widest field of view.