The King Arms M4 Striker series of airsoft guns are largely constructed from high-quality Nylon Fiber that makes the Rifle lightweight and easy to use, but is still surprisingly heavy, weighing in at a 1.6kg for the shortest variant. The replica is based on the M4/AR Platform, with the addition of an M-LOK Railed Handguard which is ready to accept accessories, such as Grips, Lasers, Lights and more. The Handguard comes supplied with 20mm Rail Sections so that you can still use typical 20mm/RIS accessories. The Handguard has a 20mm Rail that runs the full length to the back of the Receiver and is ready to accept Sights/Scopes to help you aim better. The Gun comes included with a set of Flip Up Ironsights, which can be used in place of sight, or used as a backup to your Sight, should the batteries give up during a game day. A 14mm CCW Threaded Barrel can be found underneath the Flash Hider, accessed by simply unscrewing the Flash Hider. A Sliding Stock at the rear of the Gun allows you to change the overall length of the Rifle to suit each user and is also where your Battery should be installed. Just pull down on the Stock Lever and pull the Stock off the back of the Buffer Tube to access the Mini Tamiya Connector inside. A 7.4v Stick LiPo is ideal for the space inside. The Stock also features QD Sling Sockets, which can be used to install a Quick Release Sling Loop. The Receiver and Magazine are adorned with various trademarks and markings, which makes the Rifle look far more realistic than most full-polymer builds. 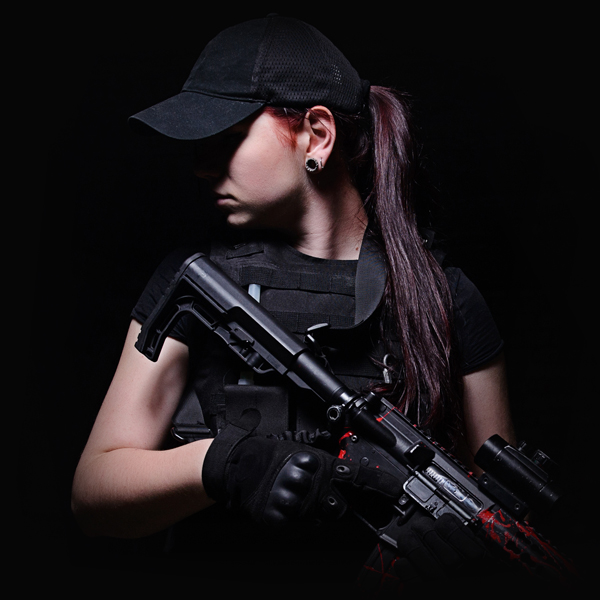